Ever since A Hall of Mirrors depicted the wild side of New Orleans in the 1960s, Robert Stone (1937–2015) has situated novels where America has shattered and the action is at a pitch. In Dog Soldiers, he covered the Vietnam War and drug smuggling. A Flag for Sunrise captured revolutionary discontent in Central America. Children of Light exposed the crass values of Hollywood. Outerbridge Reach depicted how existential angst can lead to a longing for heroic transcendence. The clash of religions in Jerusalem drove Damascus Gate. Traditional town-gown tensions amid twenty-first-century culture wars propelled Death of the Black-Haired Girl.

Stone’s reputation rests on his mastery of the craft of fiction. These interviews are replete with insights about the creative process as he responds with disarming honesty to probing questions about his major works. Stone also has fascinating things to say about his remarkable life―a schizophrenic mother, a stint in the navy, his involvement with Ken Kesey’s Merry Pranksters, and his presence at the creation of the counterculture. From the publication of A Hall of Mirrors until his death in 2015, Stone was a major figure in American literature. 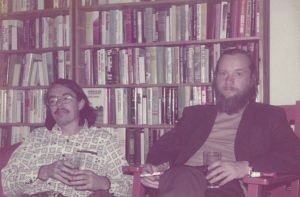 A Conversation with William Heath

Praise for Conversations with Robert Stone

Robert Stone unquestionably remains one of the great American novelists of the twentieth century, one who could grasp and hold the spirit of his age. His introspection about his craft was deep and thoughtfully considered, and he led a hell of an interesting life. That combination makes this collection of interviews both fascinating and extremely valuable.   —Madison Smartt Bell

Robert Stone is one of our country’s best writers—ever—and his wise, lucid, and gently stern voice is preserved in the pages of this fine volume.   —Tim O’Brien

Looking for Holiday gifts? Here, then, are a sackful of titles sure to make the season bright…. In Conversations with Robert Stone, William Heath, professor emeritus at Mount St. Mary’s University, collects a dozen interviews in which Robert Stone discusses his early years, the 1960s and his dark moral fictions, including A Hall of Mirrors and Dog Soldiers.   —Michael Dirda, The Washington Post, 12/6/16

Robert Stone is one of the very few American writers of the past half-century who dove deeply into the heart of darkness and came back morally clear-eyed with a mission to tell what he saw in all its frightful magnificence. His vision of the full-blown American craziness will be sorely missed during the coming years of crackpot ascendancy. The interviews collected in this book will convey to lovers of Stone’s work as well as those who haven’t yet had the pleasure, some of the texture of his thought and the stark beauty—moral as well as literary—of his peerless work.   —Todd Gitlin

Robert Stone was the son of a schizophrenic single-mother, a high school dropout and former acid user, who survived his unstable childhood to become a prophetic voice of the ‘60s and a National Book Award winner. He published eight novels and a memoir before passing away in 2015 at the age of 77. To decode Stone is to expose the layers of conflict and craft that made him the novelist that he is. William Heath, an award-winning author and historian, took on the challenging task of compiling Stone’s interviews for Conversations with Robert Stone. The book, selected by Michael Dirda of the Washington Post as a holiday pick, opens with a 1975 conversation with Stone when Heath was a professor at Vassar.    —Frederick News Post, 12/17/16

I can count the number of books I could not finish on one hand. Robert Stone’s A Hall of Mirrors is at the top of the list and I didn’t read his following novels, either. The interviews in this compilation have all of his novels back at the top of my list – of Want to Reads. When I found A Hall of Mirrors too deep and dark and disjointed to finish, I was in my early 20’s and decidedly NOT a part of the acid dropping revolutionaries of the ’50’s and ’60’s. I have always worked hard, and desperately needed the husband and children that were MY American Dream. No time for play. Now that I am retired and my children are grown, I have a lot more time and patience and understanding of the flower children per say, and I think I will very much enjoy these stories with a very different point of view. Thank you, William Heath, for putting these together. They are eye-opening reviews. Those interviews that include questions from Prof. Robert Solotaroff are exceptionally presented. I am sorry for all the years I missed out on Robert Stone’s work.   —Bonnye Reed, Goodreads